Home Smartphone Sony Xperia 1 II with 5G and blazing fast AF
Facebook
Linkedin
Twitter
ReddIt
WhatsApp
Telegram
Viber
Pinterest
Email
As the MWC 2020 has been cancelled. Therefore, Sony had an online event to announce a bunch of new phones. Also with its flagship named as Sony Xperia 1 II. Sony also confirmed that it’s developing the Xperia Pro. Which is supposed to function as a professional tool for video makers. 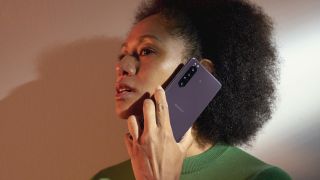 Starting with the display, the flagship is packing a 21:9 cinematic ratio 6.5” 4K HDR OLED panel. That offers a creator mode powered by CineAlta – Sony’s pro camera division. The device is implemented with Motion Blur Reduction which is equivalent to that of 90Hz display. By analyzing what’s on the screen and adjusting individual frames to scale back frame lag.

Like the initial Xperia 1, Xperia 1 II also features a triple camera setup – a 12MP F/1.7 24mm wide shooter with OIS, a 12MP F/2.4 70mm telephoto shooter with OIS and a 12MP F/2.2 16mm ultrawide shooter, but the setup brings bigger sensors and faster Zeiss branding lenses. The flagship also features a 3D time of flight unit for the enhanced zoom. There’s an 8MP F/2.0 selfie camera unit sitting in the top bezel.
The Mark II’s imaging copies plenty of features from Sony’s mirrorless cameras. The device features Eye AF from the Xperia 1 but this time it also works on animals too. 20fps bursts with AF tracking is present in the model which Sony claims Xperia 1 II is first smartphone to do so.
The handset is powered by Snapdragon 865 5G SoC that works on Sub 6 GHz networks. It is paired with 8GB of RAM and 256GB storage and space for dual nano SIMs. As the phone is for creative people who might want to record lots of videos there’s microSD card support for up to 1TB of extra storage.
On the battery side it packs 4,000mAh battery that Sony promises will last longer, thanks to its new and improved battery-care algorithms. The phone is rated IP65/IP68 for water and dust protection and brings back the 3.5mm audio jack that Xperia 1 skipped. The handset will hardware decode streams from Tidal to optimize sound quality when listening to music.
The Sony Xperia 1 II will be available in three beautiful colour Black, White and Purple. The device will start shipping from late Spring 2020 with Android 10 and price yet to be confirmed.