Skip to content
Fuji gives us another small but popular camera- the Fujifilm X100V (even being the fifth camera in the lineup, the V is pounced vee not five) announced on February 4 .The X100 series includes FinePix X100, X100S, X100T, X100F and the latest X100V. It is a major upgrade over its predecessor with more significant changes making it compact and feasible for photography. 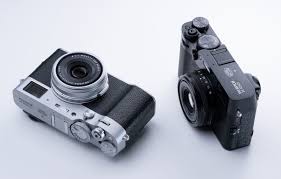 The X100V has a new 26.1 MP X-Trans CMOS sensor and image processor taken from the Fuji’s high-end X-Pro3 i.e. a new gen X Processor 4.It comes with a fixed lens of 23 mm F/2, so you won’t be able to switch them around like most of the cameras. The 23 mm F/2 lens has a usable focal length of 35mm with a built-in ND filter and is sharper amongst all in the series. Optimal attachment can be used to alter the focal length of the lens.
As for the video, camera is capable of shooting 4K video at 30fps in 8-bit 4:2:0 internally and 10-bit 4:2:2 externally through HDMI. It also records FullHD video at 120fps. X100V offers a tilting LCD screen that sits flush against the back of the camera, for the first time. There’s a microphone jack support also.
The X100V is partially weather sealed camera built inside a gorgeous magnesium alloy and aluminum body available in two colours – silver and black. It also inherits the X-Pro3’s much improved OLED/optical viewfinder offering a new 3.69 million dot hybrid viewfinder for shooting at higher frame rate of 100fps. 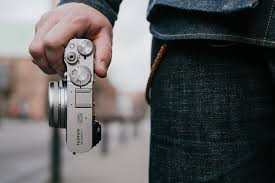 A more direct controls replenish the retro appeal to the camera. New manual control dials for ISO, joystick for d-pad are some of its other improvements. Other features includes refurbish camera’s grip, Fuji film emulation modes, such as Eternal, F-log and a fat log profile. And also a 450 shot battery life. Which Fuji claims to have achieved without having to make the camera bigger.
All of these fit into a package that is highly compacts and attractive which makes it a fun little camera. Although the camera is not as thin as a mobile phone. The compact size makes it ideal for those who want something pocket able with retro looks.

Fujifilm X100V is priced at $1,399 / £1,299. It is not a cheap camera but really well made with quality hardware and software. X100V is not suitable for those wanting to switch lenses. At the end, I think this camera is for someone who already owns and loves Fuji’s. But want something smaller, compact and little bit more limiting while travelling.