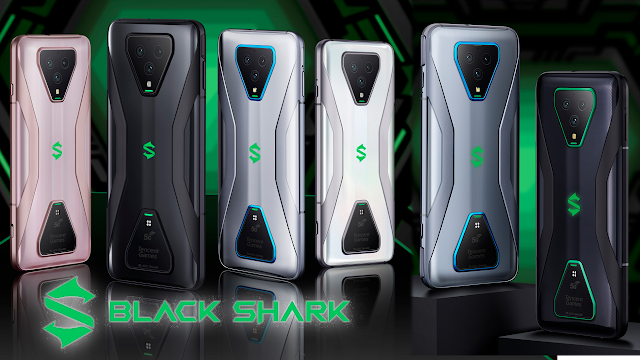 Being the Pro version of the series the device packs a couple of extra features in compare to non-Pro version. The Black Shark 3 Pro packs a massive 7.1“QHD+ OLED panel with an aspect ratio of 19:5.9. The screen has peak brightness of 500 nits with 90Hz refresh rate and the world’s fastest 270Hz touch sampling rate.
Black Shark 3 Pro is powered by the Snapdragon 865 processor and Adreno 650 GPU but has LPDDR4X dual channel memory of 8 GB and LPDDR5 12 GB dual channel memory variant. In terms of storage, there is only one variant of 256 GB of UFS 3.0 Storage. Needless to say, the phone supports 5G connectivity and there’s a support for Wi-Fi 6.
The smartphone comes with 20 MP Selfie camera and the rear setup has a 64 MP main camera with F/1.8 aperture accompanied by ultra wide angle unit of 13 MP and depth sensor of 5 MP. These camera has support for laser focus.
Black Shark 3 Pro has a huge 5,000 mAh battery and supports blazing fast 65W charging. Xiaomi claims that it can go from 0 to 100% in just 38 minutes. The phone also has support for 18W magnetic charger that goes on the back of the phone.

This variant of the device has a new physical pop up shoulder triggers which is a replacement for the previous touch sensitive air triggers. These triggers are capable of at least 300,000 pops ups without any issues.

The Black Shark 3 has a 6.67” screen with FHD+ resolution an aspect ratio of 20:9 and a pixel density of 394ppi. The screen offers a peak brightness of 500 nits and has 90Hz refresh rate same as the pro version. The handset is powered by same processor and GPU as the Pro version but the storage variants are of 8GB/128GB, 12GB/128GB and 12GB/256GB.

The standard model comes in three colours- Lightning Black, Star Silver and Armor Gray whle the Pro is available in only two colours – Phantom Black and Armor Grey. The standard version will go on sale from March 6 with the price tag of CNY 3,499 for 8GB/128GB, CNY 3,499 for 12GB/128GB and CNY 3,799 for 12GB/256GB. Whereas the Pro variant is up for reservation with pre-sale on March 10. Black Shark 3 Pro variant of 8GB/256GB is priced at CNY 4,699 and 12GB/256GB is tagged at CNY 4,999.
Both the handset are currently available in China and there is no information on availability in foreign markets.